To help our Online readers with More and more Working 3G Tricks, TweaksMe.com (A TricksMe.in initiative ) is back with another high-speed Docomo 3G TCP VPN Trick which is 100% Working in some of the states. The Docomo 3G Trick for April 2019 works on new APN and is based on TCP VPN tunneling method. We have already shared the Tata Docomo UDP Trick for April 2019 based on HVC APN, but that was found to be only working in very few states, but this new updated Docomo TCP Trick is a sure shot working trick almost all over India.

Tata Docomo has always launched cost-effective 3G packs to attract more internet addicted user’s hence one rarely thinks to use tricks on Docomo but Some senior members from different states were enjoying secret Docomo 3G ticks since months and now after tweaking a lot and searching the net we have found this latest Tata Docomo 3G TCP VPN Trick – 100% Confirmed working for April 2019 on new APN,  Here are some of the features below for this trick.

Tweaking with this Tata Docomo TCP VPN trick is now much easier with our Guide and complete tutorial attached to the trick file.

At First, you will need to download the Config and an Instructions file, in which all the details including New APN settings and other details are given. And then you may go with the below steps to connect a TCP VPN config on Windows PC. You may see the video below to understands it visually how a VPN Trick works.

Screenshot of the Trick: 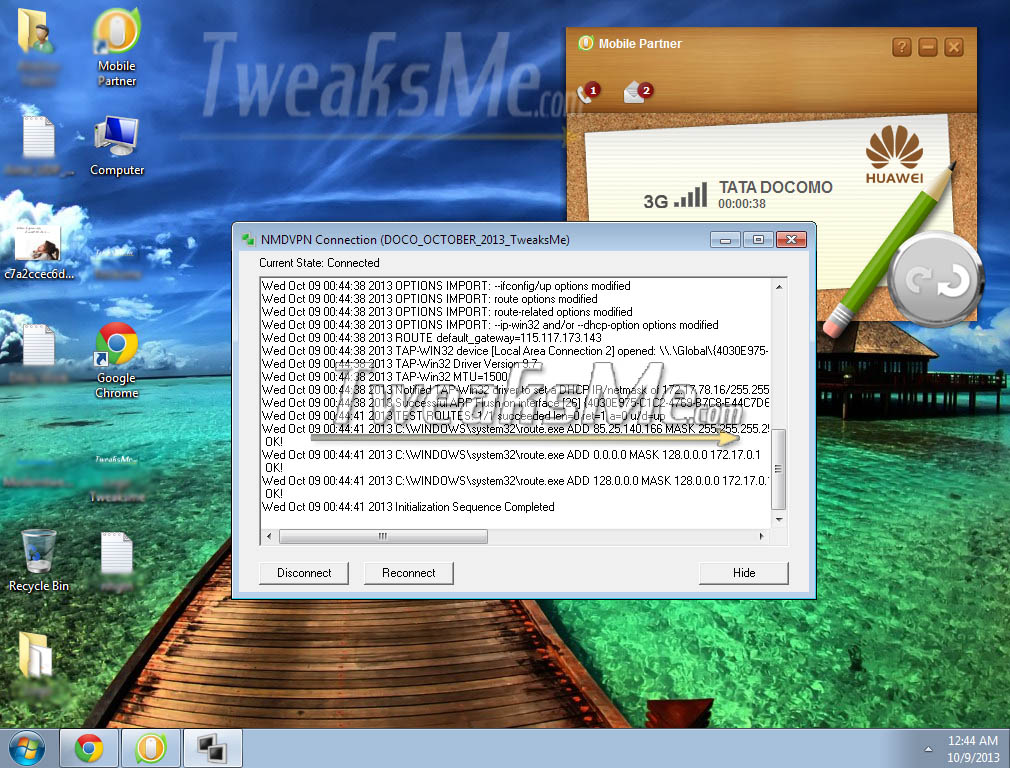 Another Video is being Uploaded, Kindly check after some time

For those who have tried the recently Shared Tata Docomo UDP VPN trick but not working, then just download this trick and configure it, this will surely work for you. We will also be posting a detailed video tutorial for using the same trick on Android Smartphones (4.0+).

Docomo 3G TCP VPN Trick for April 2019 is 100% working in tested, hence it is much better to directly download it and implement rather than asking us it is working or not. Please note Comments requesting trick files via Emails will not be entertained at all. You will have to download it from this blog only. Do Like TweaksMe.com Official Fan Page on Facebook to get yourself updated towards latest Tweaks.